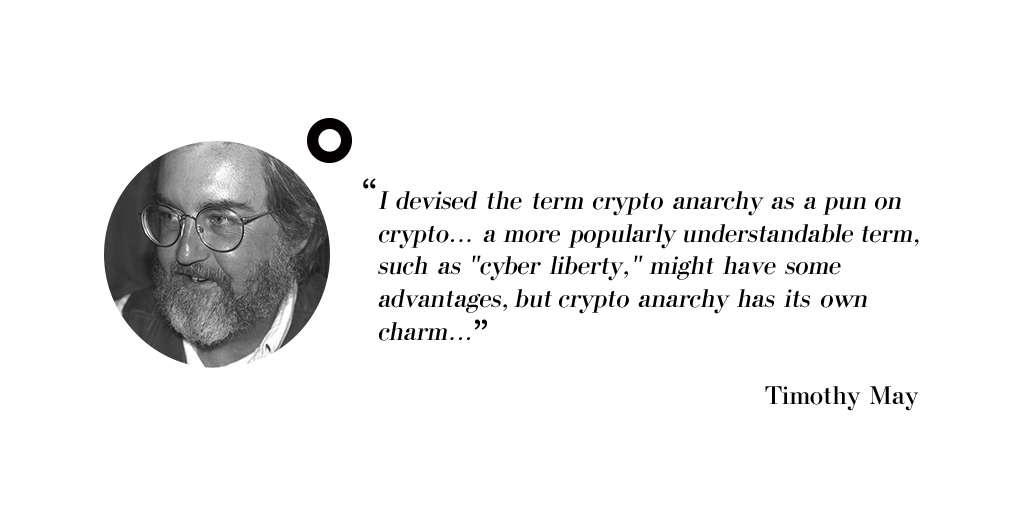 Sadly, this past week we lost an icon that helped to spur the cypherpunk movement. Timothy May, who wrote The Crypto Anarchist Manifesto in 1988, lauched a movement that is still very prominent today.

For the uninitiated, a Crypto-Anarchist focuses on subverting the current laws and using new technologies to the benefit of the common man.

The manifesto was written just before the first crypto wars began during the early 1990’s.

The idea that a normal citizen could completely hide what they say in an electronic message was their biggest concern.

The governments cited national security as a concern (We’ve heard this excuse used many times before).

Tim May was embroiled in the center of this alongside his group of fellow cypherpunks.

The legislation of the anti-encryption laws would also affect payment processing technology. There was a large push back from tech companies that would have to deal with these issues first-hand.

The crypto wars of the 1990’s ended with the concession from the government that encryption was readily available around the world.

The public had won their first bout against the government surveillance state. Alongside the public, you had the cypherpunks and large tech companies that were all fighting a common threat.

There was not much of an issue in terms of encryption for quite a few more years.

Every few years afterward, the idea of backdoors into encryption schemes were brought up but nothing ever came about these new ideations.

The expansion of computational power and development of more efficient processing equipment closed the gap as to who can gain access to encryption software.

The widespread availabilty of software/hardware that can perform these cryptographic calculations involved in encryption and the ease of use has made it possible for the layman to encrypt their own personal messages, video calls,emails, and notes.

Encrypting an email with someone who has never imported a key to their keyring, or generated their own PGP public/private key pair is a thing of the past.

Many of the services that exist today offer these solutions out of the box. The process has become much easier for all parties involved.

Anyone that is now using this technology benefits from this on a privacy and security level.

With all parties benefitting, the leviathan rears its head once more. Australia has passed an anti-encryption bill that will force large tech companies to allow the Australian government to obtain hardware access(citing national security as a major reason).

Outrage has spilled out of the larger tech companies. The end-to-end zero knowledge messaging/calling app, Signal, has taken a stand against this bill.

This sounds very similar to the issues Tim May was battling with during the early days of the First Crypto War.

The cypherpunks came out on top and I’m sure this legislation will face a similar fate.

May’s Impact on the World

The imprint that Timothy May left on the world is profound. The mass adoption of encryption as well as cryptocurrencies shows just how far ahead of the times he was.

He insisted on the use of encryption to keep your communications private.

Currently on a majority of mobile phones there are applications that provide encrypted communications. Whatsapp uses the Signal protocol which was developed by cypherpunk Moxie Marlinspike.

The rise of cryptocurrencies is an ideal that May was very hopeful for.

May did come out against the anti-privacy issues of bitcoin.

There are projects that offer solutions for this privacy debate.

Much of the developer-base of these certain cryptocurrencies have their foundation based in the cypherpunk tradition.

The Cryptocurrencies that aim for a privacy by default mechanism are monero and the soon to launch GRIN which uses the Mimblewimble Protocol (To see an extremely entertaining introduction to the GRIN project via talk-to-text chat for privacy preservation, listen to the creator of Grin).

Zcash is moving in the direction of private by default and the superior cryptography of the ZK range proofs will help to create a very private cryptocurrency.

The impact Tim May made on the world by helping to create a social movement shows the importance and strength of his ideals.

He has impacted a generation of people that are growing up in the digital age.

He influenced builders in the 21st century.

You have people creating new currencies, exposing government surveillance on a national scale, circumventing the broken bueracratic system by creating their own markets, anonymous internet protocols, as well as making encryption applicable to the common man (You can find a list of prominent cypherpunks here and also here).

There isn’t enough that can be said about the applications in which he believed could positively affect us.

May was cognizant of the encroaching all-seeing eye of the state but I believe we are in much better shape now than we’ve ever been.

There may be negative news about what we currently face as individuals, from the unprecedented surveillance of the Snowden leaks to the aforementioned Australian anti-encryption bill, but looking at the grand scheme of our daily lives, these tools and their functions have helped to create a much better day than May could have imagined in 1988.

He was a proponent for the industriousness of human nature to outpace the slow moving regulation that would try to bog down any progress.

You can listen here to what he thought people/creators should do when they develop ground breaking technology.

Arise, you have nothing to lose but your barbed wire fences!

Shared with 💚 by Free Spirit

Regarded as one of the most important and influential stand-up comics of all time, he was dubbed “the dean of counterculture  comedians”.

He was known for his dark comedy and reflections on politics, the English language, psychology, religion and taboo subjects.

His “seven dirty words” routine was central to the 1978 United States Supreme Court case F.C.C. v. Pacifica Foundation, in which a 5–4 decision affirmed the government’s power to censor indecent material on the public airwaves.

The first of Carlin’s 14 stand-up comedy specials for HBO was filmed in 1977. From the late 1980s, his routines focused on sociocultural criticism of American society.

He often commented on American political issues and satirized American culture. He was a frequent performer and guest host on The Tonight Show during the three-decade Johnny Carson era and hosted the first episode of Saturday Night Live in 1975. His final comedy special, It’s Bad for Ya, was filmed less than four months before his death from cardiac failure.

In 2008, he was posthumously awarded the Mark Twain Prize for American Humor. In 2004, he placed second on Comedy Central‘s list of top 10 American comedians.

In 2017, Rolling Stone magazine ranked him second (behind Richard Pryor) on its list of the 50 best stand-up comedians of all time.

His film roles included a taxi driver in Car Wash, Frank Madras in Outrageous Fortune, Rufus in Bill & Ted’s Excellent Adventure  and Bill & Ted’s Bogus Journey, Eddie Detreville in The Prince of Tides, Cardinal Ignatius Glick in Dogma, Architect in Scary Movie 3, and Bart Trinké in Jersey Girl. He did voice-over roles as Zugor in Tarzan II, Fillmore in Cars and narrated the first four seasons in the American dub of the British children’s television show Thomas & Friends.

Thank you for the special moments !